I don’t really do album reviews and I’m not really a critic but… I’ve been waiting for an AC/DC album for 6 years! So I think I’ll try to express what this album sounds like, spoil alert… I love it!

Finally! AC/DC is back in the game, I suffered so much seeing Brian leaving the band, then Cliff, then Malcolm passed away, I saw Angus grieving his brother and it just shattered me, but I knew Angus can’t stand still, I knew he was itching for new things, I saw them live around 9 times and I know that Angus belongs with a guitar hanging from him and running around a stage.

The news came earlier this year (covid year) that AC/DC was about to release something, they are the quietest band ever! No one knows anything about them until they decide they want to be heard.

Alright… so… they release the single “Shot in the dark” instant AC/DC sound, sounded great but it was a bit too radioey, next… “Realize” came out… again… sounded awesome and unmistakably AC/DC, however… it was too radioey again.

I pre-ordered the album of course, I got the one that lights up! Looks awesome!

Ok… album arrives… oh wait… I don’t have a cd player… well.. I actually bought the album also on itunes at 5am that day and started listening to it.

Because I’m such a huge fan of AC/DC… thing take me a bit longer to process, the album sounded great, but the songs were different, Brian sounded awesome, Cliff can definitely be heard! And the drums sound like Phil of course, what about Stevie and Angus?. I’m amazed of how well Stevie has delivered so far, he not only sounds great.. he also adopted Mal’s style of playng!

What about Angus? He also sounds awesome but… there’s a general lack of solos…. his solos are shorter than usual (similar to last couple of albums) and sometimes they are more like fills… which do not gain that solo “momentum”

Well.. that was my first impression after the first spin…. I’ve now listened to it probably… 20 times, and I’m more in love than ever!

Man what a great album, apart from sounding incredible, every member is on their top shape! Brian belting vocals like if he was back in the 80s! Phil… well… just being Phil, and the rest of the gang just ploughing through like a freight train!

Every song has something… that makes you want to listen to it over and over, and you still discover more little things with each listen.

“Through the mists of time” made me shed a few tears, great track! Unusual for AC/DC. And according to angus this was written around the era of stiff upper lip! This one is for Mal, and even Brian says he gets the shivers!

“Money Shot” oh man, I love this one, brian is almost rapping again! The beat is great! Guitars are well defined and it sounds tight! At a nice pace.

“Code Red” is this the new “Back in Black” great track, again… Brian’s vocals are just great!

all the other tracks are awesome too! It’s great to hear the band again, this has made me very happy and I can feel some songs becoming classics already.

I still would’ve loved to hear some more signature solos from Angus, but… it’s ok, it’s still a great record that I listen to at least once a day.

THANK YOU!! You turned 2020 into a great year! And you’ve also made all the songs available for free on YouTube, well done! For always being there for us, for being humble but determined and for only caring of delivering the best to your fans.

AC/DC we salute you! And I’ll be attending as many shows as possible next year!

A day in NYC…(support the locals!!)

So I recently went on holiday to the Big City, did the typical touristy stuff but I wanted to do something special with the music stores… of course we can go to Guitar Center and fool around with pretty much anything they have there… but I wanted a “true” NYC experience…
I woke up that day and added to my google maps all the music stores up to Central Park, after 30 minutes of research, my itinerary looked like this: 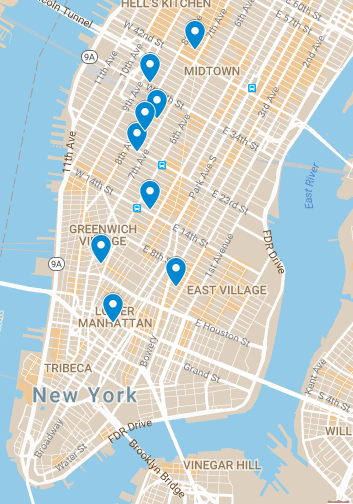 I’ll go into more detail later… but it took me around 2 days to do the whole thing , it was a tremendously rewarding experience, I used to skip local stores and go to big chains like Guitar Center or Samash, mainly because I used to find it a bit uncomfortable asking to play a specific guitar to the owner in a small store where “everyone” is watching you or expecting to buy something or “get the hell outta my store”, but this was just my perception of being just a kid and not realizing how annoying big stores are… filled up with kids treating instruments like toys or people shredding away at high volume disturbing everyone else at the store.

So I packed up by bag put some comfortable shoes and headed to the streets.

From South to North.. these are the stores I went into:

Rudy’s Music  Shop(461 Broome Street): had an extremely luxurious selection of guitars, it was just breathtaking seeing not only custom shop guitars but also guitars owned by famous artists and some limited runs. A great place to visit and admire some gems they have there… 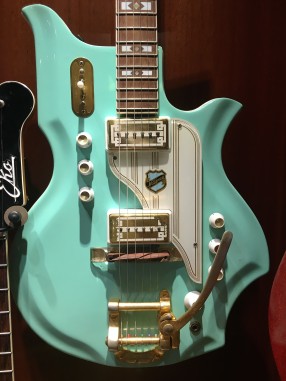 Rivington Guitars 73 East 4th Street: As the owner describes it “Little guitar store” it is little but packed with some gorgeous SGs, most of them vintage and at a great price! he had a 68 for like 3 grand or something, so you can tell the guy is not trying to pull one on you by selling you overpriced vintage stuff! I wish I had gone back to that store because my visit didn’t make it any justice, 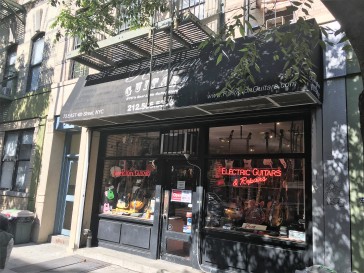 Chelsea Guitars (224 West 23rd Street): This is the one that will steal all my good memories from New York, I went into the store presenting my self as a “blogger” I’m sure that’s what every store owner wants to hear… I almost wanted to tell him… “I have a blog.. but I’m still cool”, anyway… I think I spent 2 to 3 hours in total ( I visited the place twice) Danny had so many cool stories and he dedicated time to each one of them, he had some exquisite and beautiful guitars there… some old and some newer ones (he did take the time to explain what really is an Old guitar!, thanks Danny). This is a must visit and please dedicate time to it and of course buy something! although he won’t force it on you, if you don’t have much cash on you (we musicians never do!) just buy a t-shirt they are very cool. 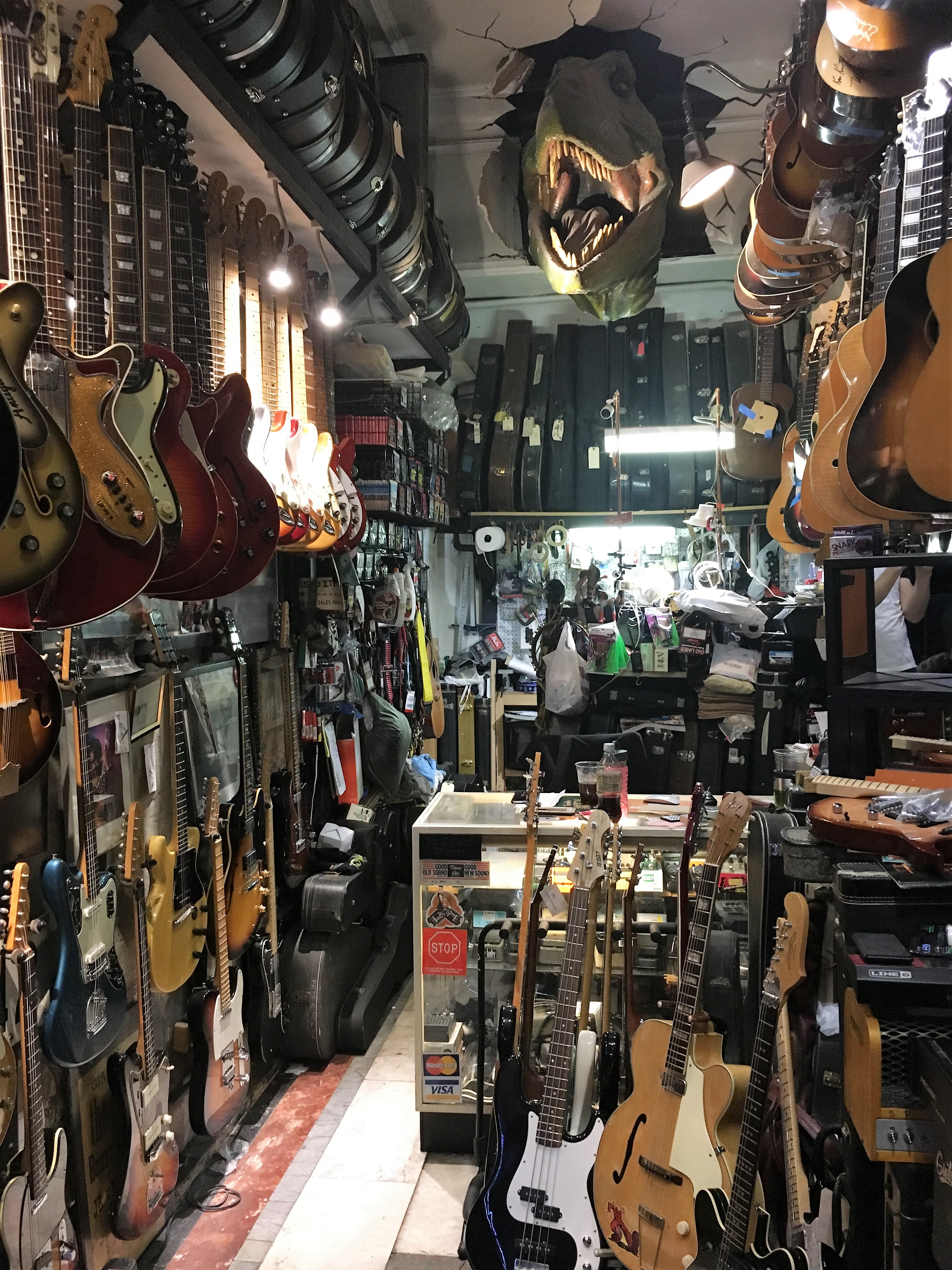 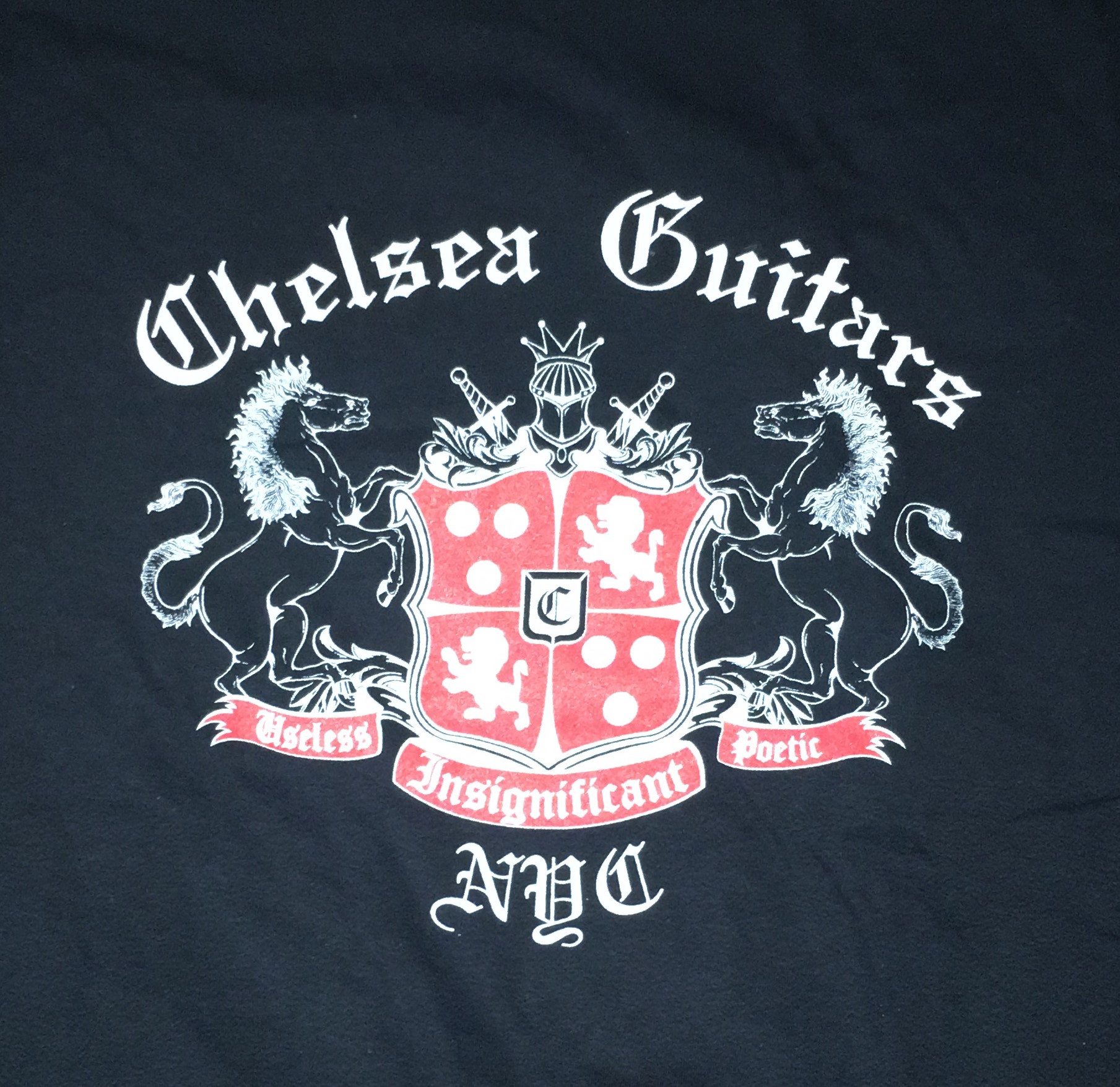 30th Street Guitars (27th between 6th and 7th ave) : This store reminded me of Rudy’s but it’s “friendlier” you can browse around without any guilt, they had some beautiful guitars, I spoke to the technician or the owner.. (who knows) and he confessed that he had spent time fixing Angus’ guitar for the show of the 14th of September at the Madison Square Garden, (my whole purpose of the trip). again… great place to visit

Rogue Music (30th between 6th and 7th ave): Another cool store this one, I don’t think they had any of my particular interest… I mainly care about SGs, but the owner was exceptionally nice.

I won’t comment on Samash or  Guitar Center… you probably already now what a chain store looks like :).

That’s my list… those where my best 2 days in NYC, I loved every minute of it, everyone was exceptionally nice and now I understand the concept of supporting local business… I’m sure they have plenty of customers in NYC… but if you have local stores in your area that you haven’t been to, please do… go there talk to people and get involved, they’ll surely appreciate your custom.

It’s pretty obvious that I’m a Gibson SG fan, and as soon as I saw this book coming out I had to have it.

The best thing about it it’s that it’s new… so you’ll find up to date info  and great quality pictures, the data seems to be correct  as well, I know the history of the SG quite well and I didn’t find any mistakes which is a good thing.

The book takes you on the journey since the SG was designed and went on the market for the first time, it also tells us about the most famous guitar players that use the SG as a main guitar, giving us detailed pictures on their custom models and also what was different about their guitars.

This book is intended for someone that:

b) is really into the history of the SG

With this I’m not trying to say it’s a boring book… but you have to be a keen SG person to fully enjoy the book as it takes us through every change on the model over the years, and that is the main reason I love it.

I recommend the book for any Gibson SG fans out there, it’s a great read and also a very good reference book to have, if you are someone that collects SGs this will help you identify your new guitar on the Gibson timeline 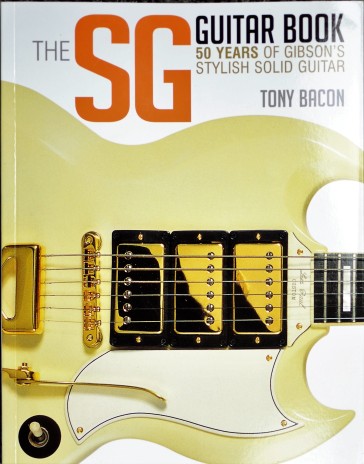 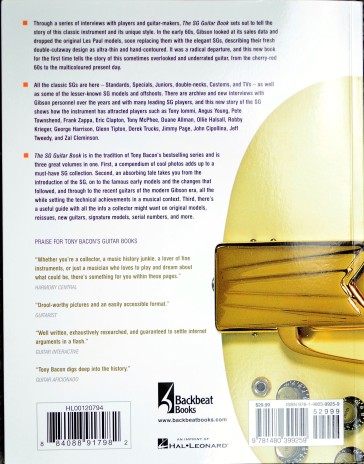 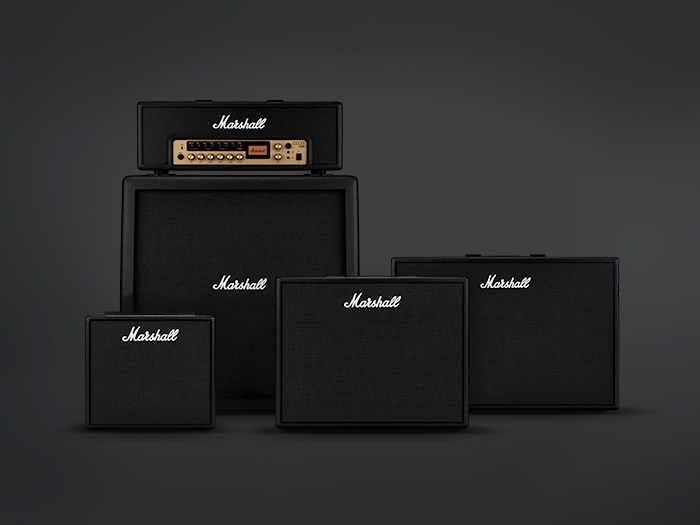 So, a few weeks ago Marshall posted on their official Facebook account that on the 21st of January they where going to “change the world” again or something like that, when I saw that I got really anxious and I honestly had no idea what could they possibly launch, they don’t need much do they? it’s like Coca Cola… they got the brand and the recipe… nothing needs to be improved, no matter how many flavours they launch you always go back to the regular Coca Cola, however they’ve launched something called “Code”, which is effectively a modelling amp.

Marshall has been smart about this, let’s be honest.. there are tons of amp modellings… but they are from Line 6 or VOX, and to be honest they are not the most popular amps out there… but they offer modellings that “recreate” the sound of the classics, however… nothing gets more classic than a good old Marshall tube amp, and if you’ve tried these modelling amps I think it’s fair to say that they are excellent… but you still want a Marshall.

The idea behind this is brilliant, it’s a cheap-ish (£169 for the 25w combo version) solid state amp that can recreate pretty much any other amp in the Marshall range, but it’s not only that… for those of you that are crazy about tubes/valves this little amp lets you combine pre-amps with output amps using different combinations of tube types on either of one of them, and this is great because this is something that’s hard to achieve when you have a tube amp, you can’t just go around changing tubes without re-biasing or buying adapters.

I don’t know about you but I’m thrilled with this and can’t wait to get my hands on one, I’ll certainly be sharing the experience if I do so!

here is a cool video from Marshall showing the features of this product: